Time To Face The Music

I have picked up creating music again, an old hobby which I used to pour my heart and soul into. 15 years have passed since I was last actively making music and it had been nagging at me to pick it back up. I needed a new passion besides love for coding and 18 months ago I started on my journey from 8-bit Trackers into the Digital  Audio Workstation world of today. Synth 13 - 2011 by zybermark

The first tracker I worked with was FAC SoundTracker which sported 9 monophonic FM channels and an ADPCM channel, the resulting output was a mono audio stream. With the release of Moonblaster the MSX scene was propelled into a pseudo stereo universe; the MSX home computer had 2 fairly similar sound expansion cards, by routing the output of these separately to the left and right channels a stereo sound was created. The audio hardware had not changed so this tracker still featured 9 monophonic FM channels and an ADPCM channel, however because 3 channels were used for drums this effectively brought it down to 6 FM channels + drums. This dual sound generator model allowed for some interesting sound design; by detuning one side slightly more or using totally different FM patches some interesting sounds could be created.

These trackers were different from most trackers in the day because they used FM channels instead of sample channels to create the compositions. This still heavily biases my preference towards composing using real notes, as opposed to prerecorded clips. 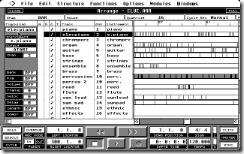 I tinkered around with MIDI and my Yamaha PSS-780 back then (PC + MPU-401 + Cakewalk 1.0, Atari ST 1024 + Cubase), but never ended up doing any serious work with it. Even though I enjoyed my PSS-780, the challenge of composing using MIDI was a lot steeper than using the trackers I had at my disposal. Using a tracker also made my music more portable because within my circle of friends the hardware was much more prolific than my particular MIDI setup.

My initial focus was on getting (back) up to speed on all the technologies used in creating digital music nowadays. Tweakheadz Labs’ Guide to the Home and Project Studio proved to be an excellent resource for this; Scott McLean at TranceMusicMastery also has some great videos on working with the DAW technology of today. Armed with this newfound knowledge I set off on a project to recreate an old song: “Synth 13”; I considered this song to be “OK” and did not want to burn myself out on my favorite one.

I had purchased a copy of Cakewalk Music Creator 3 a couple of years ago,set it as my goal to use that to recreate the original sound as closely as possible and started recreating the song by ear. Over time I got my hands on the original scores again to help analyze a couple busy parts, but most of the song element were still very vivid in my mind. In retrospect, the size of this learning process was just staggering! Recreating the original score was the easiest part; mastering the sequencer and its quirks, using effects effectively and finding and creating similar sounds turned into a yearlong project! Having wrapped up the initial pass I was fairly content with the final result of this project, recreating the original sound, but I  was far away from the quality I wanted to produce. The tools at my disposal in MC3 felt limiting to me; limited number of virtual synths, limited number of effects, limited number of tracks, etc. etc. I also felt that the synths and host program were not working well together, lots of funny quirks, timing issues, clicks, pops. Maybe it was just my mind rebelling against the DAW but I was fairly comfortable with this new musical creation environment and decided it was time to upgrade. I wanted to be able to take my current projects and seamlessly continue; sticking with a Cakewalk product thus was the best choice, so I invested in a copy of Sonar X1 Producer. That took care of getting better tools: awesome new synths, plugins, unlimited tracks and a fancy new UI. I still needed to improve my mixing skills; The Mixing Engineer’s Handbook turned out to be a great help to sharpen these skills and get really close to the sound I was aiming for: Synth 13 – 2011, which you can find at the beginning of this post.